Our Greatest Travelers: Birds that Fly from Pole to Pole and Shun the Darkness: Birds that Make 2, 500 Miles in a Single Flight
The Bureau of Biologic Survey of the U. S. Department of Agriculture traces the migratory patterns of birds that fly from Pole to Pole.
Recent Geographic Advances, Especially in Africa
The author commends new geographic research and exploration, highlighting cartographic advancements in Africa, including the continent’s European colonies.
South Polar Explorations
British, Norwegian, and Japanese teams set out on a year- long expedition to reach the South Pole.
The Country of the Ant Men
Traveling through the Sahara’s Erg region, the author describes the people and the landscape of this arid environment.
Pests and Parasites: Why We Need a National Law to Prevent the Importation of Insect- Infested and Diseased Plants
Citing the devastating effects of the brown- tail and gypsy moths and other pests on U. S. agriculture, a solid case is made for legislation preventing diseased and insect- infected plants from crossing our borders.
American Potash for America
In an effort to lessen U. S. farmers’ dependency on German potash – – a key agricultural fertilizer – – the U. S. Geological Survey, with the help of the federal government, seeks potash deposits on American soil.

Be the first to review “National Geographic April 1911” Cancel reply 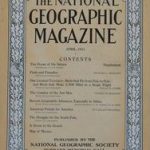