Where Have All the Insects Gone?

Species are vanishing at alarming rates.

Coming of Age With Autism

With swift detection effects may be limited.

In Argentina and Chile, millions of acres will be preserved as parkland.

How animals evolved to move through life.

A migratory tradition lives on in pastoral areas.

Thirty years after its launch into orbit around the Earth, the optical telescope continues to reveal the secrets of deep space and make amazing images.

The author gets a look at her constant companions: microscopic face mites.

It’s More Than a Show

In this remote Arctic region, the focus is squarely on nature’s grand displays. 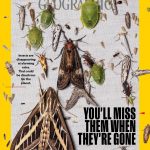